I learnt that my biological age is 39 today. That's old...Really old...Good thing is, although I might weigh a lot but my body fat is healthy. Now, I need to work to cut down stress, unhealthy habits, rest more and do more sauna...LOL. Not any normal sauna but FIR. -> refer to http://www.zazenhealthsolutions.com/. 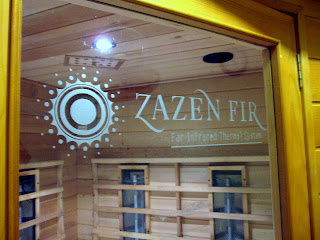 Dear and me went for a free trial today. This is not an advertorial, though. Each session of sauna is not cheap. Cheapest package comes to about RM9.90 per 30 min session and you have to sign up for 300 sessions to get that rate. Do the maths. Or you can buy the whole unit back home for RM10,500, Yup...
So, what's so special about FIR? It does not use steam (water and heat) but instead uses Far Infrared Ray. The sweat from the session is not the normal sticky, salty sweat. I don't even need to take a bath after that (taking bath after any sauna is not good actually coz your pores are open). I always feel a bit uncomfy in steam sauna. The heat and humidity makes it hard to breath. But today's session is just nice. We sat for 30 mins and feels the time is too short. They have cabins for 1 person or 2 persons. 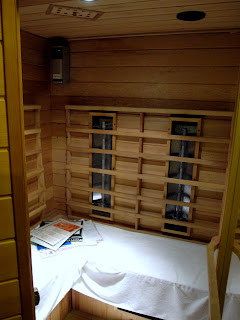 According to the consultant, we can burn up to 900 calories per session. Dear was sweating buckets and his stats actually shows improvements after the session.
So, will we consider signing up? Probably not. Money is hard earned nowadays. Furthermore, it is advisable to have at least 4 sessions per week. How are we going to find the time? We had a good Saturday. Nice breakfast of wan tan mee, relaxing sauna, rojak for lunch and just watch some series at home. I wish every weekend can be like this...Maybe I am really getting old...
yours truly, Unknown at 8:17 PM No comments:

Second year participating. Hoping to come back stronger this year but it was a let down. This year's hunt is less on cryptic questions (which we scored most of it :P). Most marks are from the challenges and there are 5 tough challenges. When I say tough, it was really tough lor...
Task 1: Climbing up KL tower
2 out of 4 of us have to complete this. It's not new to me and FL but we're not mentally prepared. Nonetheless, we made it to the top, passing many teams which were struggling half way. Then we need to look through the window using the telescope, and solve two questions. CY and KY who were at the base needs to solve some pictures clue.
Task 2: Penalty kick challenge
In the spirit of World Cup, they throw in a task that has something to do with footbal. We were given 3 attempts to kick a ball into a few holes. It's not as easy as it looks. We were not given any practice kicks. Not able to aim properly, most team failed to get any points here...us included.
Task 3: Paintball challenge
2 out of 4 need to perform this. We need to get 2 flags with 2 shooters trying to knock us out. With one the shooter focusing on each player, it's tough even trying to get past mid way. And most teams came out with bruises on their legs. After seeing so many failed attempts, we chicken-ed out. To save some time (LOL...it's actually to avoid the pain/bruises).
Task 4: Atlantis puzzle
One team member need to submerge underwater to get a glimpse of the puzzle at the bottom of the pool. 3 will be at the side. Verbally, the one in the water will have to instruct the rest to assemble the shapes same as per the one in the water. We were actually doing quite well but half way through, our puzzle was ruined by the water because we were too near the water edge.
Task 5: Final challenges
a. Find pebbles in a small tank filled with few small pythons. I took this task as I feel more comfy compared to doing task b. The 'geli' part is when after they blindfolded me, they put a big python on top of my shoulders. I can feel it's tongue on my arm....ticklish...
b. Transfer live, wiggling worms, with your mouth from one plate to another. I have to admit that it was quite gross. Applause to KY who managed to get a few mouthfuls.

Although we didn't win this time round, but it was a fun-filled day (except for the kns paintball). It was the experience that counts (and the lucky draws we got too, teeeheheheheh).
yours truly, Unknown at 8:47 PM No comments:

Email ThisBlogThis!Share to TwitterShare to FacebookShare to Pinterest
Labels: Hunts

I'm not a big fan of Toy Story. Heck, I don't even remember the first and second movie..or have I watched it before? But names like Woody or Buzz or Jessie is not new to me. When I'm being offered a free ticket for Toy Story in 3D, I did hesitate before saying ok...And so, it's my first time with 3D and it's with a movie I don't really anticipate to watch. And it's not only for the 3rd movie, I got to watch all 3 back to back. 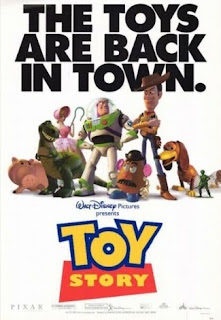 So,leaving sharp at 530pm from the office (as always), I got chauffeured to KLCC. The ticket is for free seatings, so being the kiasu people we are, we wanted to get the best seats. With not enough time to eat dinner (the first movie starts at 7pm), we smuggled in Burger King. Apologies to those who were seating beside/in front of us/near us, if you smelled my Whopper Junior (with cheese). Eating a burger oozing with mayonnaise and ketchup, in a dark cinema is not a pretty sight.We got the first row from the back thus, it was quite comfy.
Initially, I was worried that I might not get used to 3D...with comments from some that you might get dizzy, etc. But surprisingly, I survived the 5 hours movie marathon. I'm not sure whether it's due to the cinema hall in KLCC but I did not fully enjoy the 3D effect. It's just like watching a normal movie. All in all, I never thought that I would really like Toy Story but now I LOVE it. The show is hilarious with the colourful characters and the meaning behind it.
The character I like most: 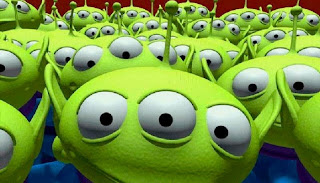 I find them really cute...oooooooooooo
Or if I must choose another fave character, it'll be: 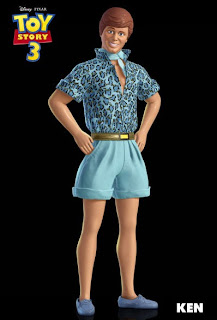 He definite is funny in his own way...(voice of Micheal Keaton)
yours truly, Unknown at 9:27 PM 2 comments:

Email ThisBlogThis!Share to TwitterShare to FacebookShare to Pinterest
Labels: Moooviesss 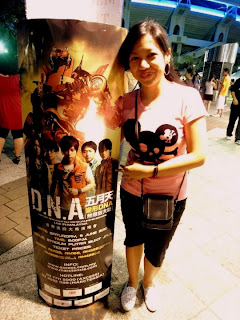 It was a fantastic show. 3.5 hours of non-stop energetic performance, I really enjoyed the concert. At least, it's a channel for me to release all the negative feelings in me lately. 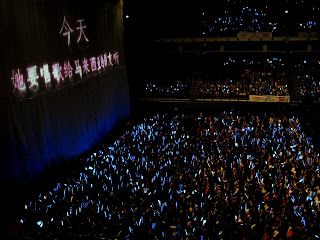 Some might say that attending a concert is a waste of money. For me, it's a once in while luxury. I love the feeling and atmosphere. Screaming fans, great music, leng chais on the stage, brilliant guitar and drums performance... 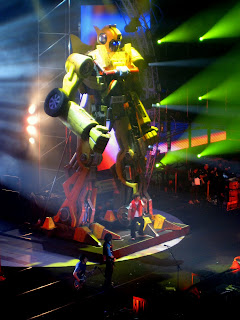 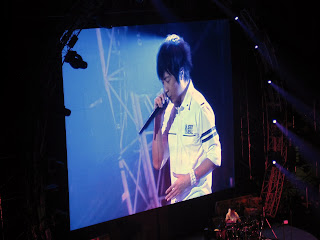 I like it when the they encouraged the audience to be interactive - sing-a-long, dance along, to hold hands with the person beside us and most of all to reflect on our daily life. Well done, Mayday!! 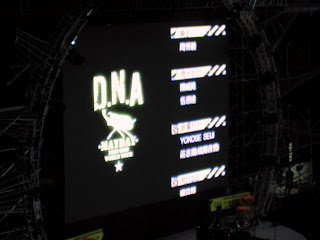 
Amazing vocal!! She gave me goosebumps during Mayday DNA concert....
yours truly, Unknown at 9:32 PM No comments:

No matter how bad, how sucks, how miserable, how de-motivating, at the end of the day, knowing that I'll be heading home to loved ones and sharing the remaining day with them, makes everything alright. Sometimes, it's just a small gesture of love makes my day. Thanks for standing by me and listening to my rants. 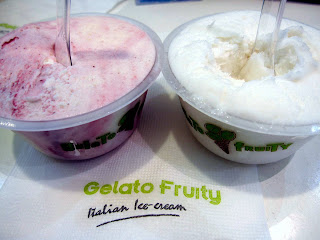 It's these little pleasures that counts...
yours truly, Unknown at 9:01 PM No comments:

I think I need to:

1) cut down on my runs and hunts...having said that, I just confirmed myself for Shape Night Run... 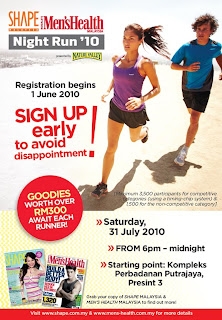 and look at those happy faces during one of our hunts... 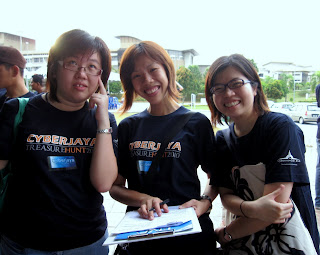 2) cut down on luxury food...RM20 for a cup of yummylicious yogurt with toppings??? 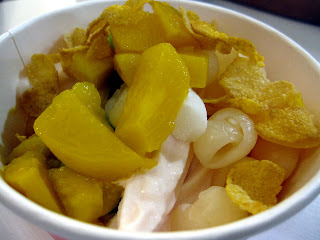 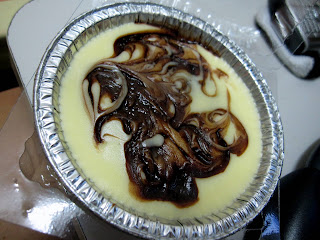