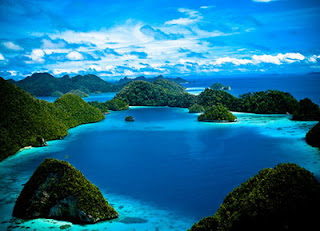 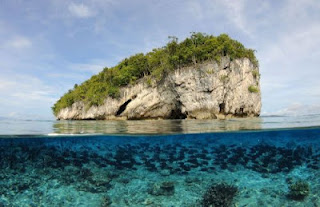 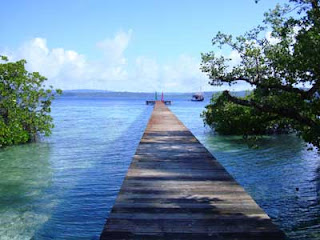 Taken from the site:

'Kissnger is an application of Lovotics. Kissenger system consists of a pair of robots to transfer kiss over distance.

http://kissenger.lovotics.com/
yours truly, Unknown at 7:53 AM No comments:


Woke up to a beautiful sunrise! 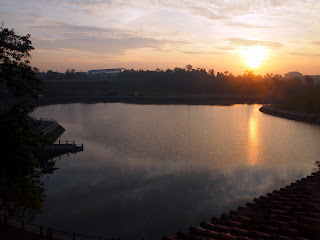 Since the place that we stayed is opened by a Korean, the girls have a chance to try on Korean costumes after breakfast. I enjoyed breakfast albeit the food sucks, as it was a cool, windy morning and with the view of the beautiful lake. 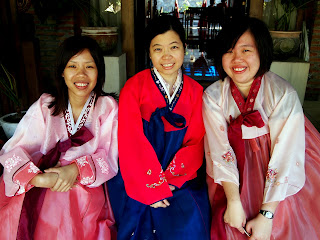 Our first destination for the day was to the foothill of Mount Merapi. It was a long walk up and along the way, someone's shoe didn't survive the journey. 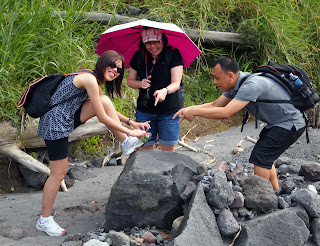 We got to see some remains of buildings and areas affected by the volcanic eruption in 2010 along the way. 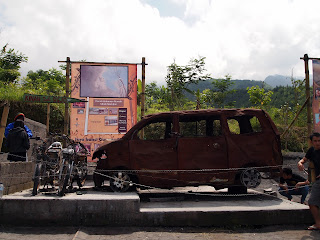 The last eruption claimed dozens of lives and also the life of Mbah Maridjan. He was named the gate keeper", charged by appointment to the Sultan of Yogyakarta with managing the volcano's hidden spirits. He refused to leave when officials came to tell him to evacuate. 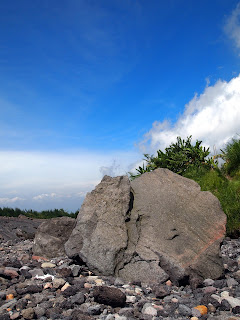 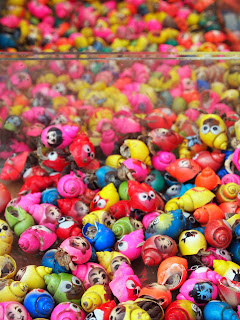 Next stop, Malioboro Road, the city’s main shopping street. The pavements here are bustling with rickshaws and stalls selling art, clothing, jewellery and snacks, perfect place to hunt for souvenirs. Too crowded for my liking but we got some great bargains. 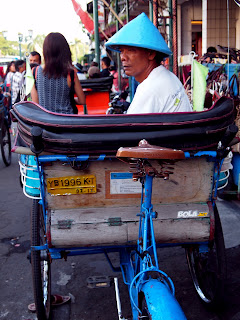 Last stop for the day is Parang Tritis beach aka PARIS. It's one of the most popular beach in Yogya and the amount of people there proves it so. 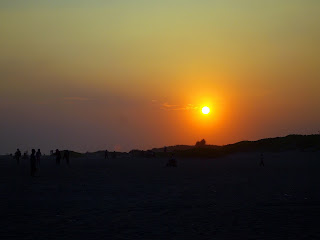 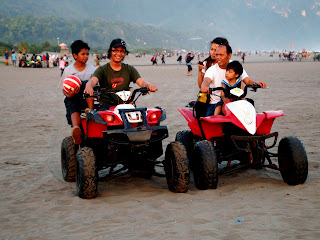 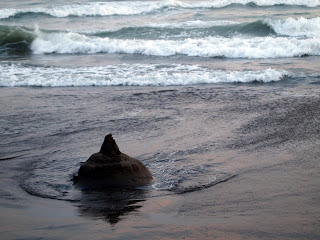 Our day ended with a little surprise party for SoonYeng. We changed our hotel for the next two nights to Yogya Plaza, a normal city hotel. 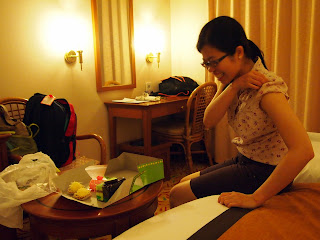 yours truly, Unknown at 7:04 PM No comments:

With all the cruel cases of snatch theft recently, I do have this tinge of fear each time I go out. I'm someone who likes to shops alone and jogs alone. With the cases happening in car parks of shopping malls, this has somehow has affected me in a way. I've lessen my visit to shopping malls (means I've spent less). Everytime I go for a jog, I’m always armed with a small pen. You’ll never know when it’ll be useful.Every morning, walking to the office is like a mission for me. I park quite far (about 15 mins walk away) at Tun Sambathan monorail station. The parking lots are FOC but in order to get it, I must reach before 7am. Normally, I'll reach about 650am and it's still quite dark.
People might think I'm paranoid. With each passing motorcycle, I'll avoid them as if I've seen a ghost. Can't blame me as this is the Brickfields area that we're talking about. Better be safe than sorry. I never carry any handbags, only my laptop bag and I'll walk as fast as I can until I reach KL Sentral.
It's really scary to read on those incidents where the victims were injured. Why need to hurt people when all you're after is wealth? Sigh....What is happening to the world now? I thought people are more civilized? We must put a stop on this by helping each other and doing our part in the society.
And to our dear government, please do something on this!
yours truly, Unknown at 8:02 AM No comments:

Day 2 started before dawn. We eagerly waited for our tour guide to pick us up at 430am to Borobudur. Borobudur is the biggest Buddhist temple in the ninth century and was completed way before Angkor Wat in Siem Reap. Borobudur has 1460 relief panels and 504 Buddha effigies. 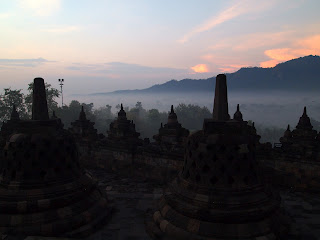 We watched Mr Sunshine peeking from behind Mount Merapi and the mist begins to dissipate while eating our sandwiches.
The base of Borobudur, called Kamadhatu, symbolizes human being that are still bound by lust. The upper four stories are called Rupadhatu symbolizing human beings who have set themselves free from lust but are still bound to appearance and shape. On this terrace, Buddha effigies are placed in open space; while on the other upper three terraces, Buddha effigies are confined in domes with holes are called Arupadhatu, symbolizing human beings that have been free from lust, appearance and shape. The top part that is called Arupa symbolizes nirvana, where Buddha is residing. 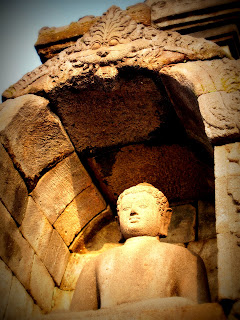 I was awestruck by the structure. It was really a wonder on how they have built such a magnificent structure way back before civilization.
We were served breakfast with this delicious banana fritters with cheese. 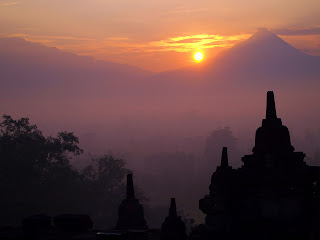 For me, watching the sunrise in Borobudur is the highlight of the trip. It was just so calm and peaceful. We are lucky that there weren't many people at that time. 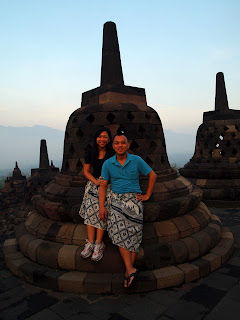 Next, we proceeded to Candi Mendut (Mendut Temple) which is 3km eastward from Borobudur. It is a Buddhist temple, built in 824 A.D. Nearby is another Buddhist temple called Candi Pawon, westward from Mendut Temple and eastward from Borobudur. Pawon Temple is not a grave but a place to keep King Indra's weapon namely Vajranala. This temple was built with volcanic stones. Architecturally it is a blend of old Javanese Hindu and Indian art. 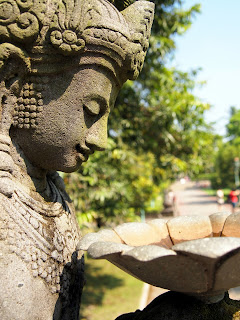 By mid day, we were on our way to Dieng Plateau, a few hours drive from Yogya. Dieng Plateau is an upland volcanic plain, famous for its scenery and ancient Hindu temples. 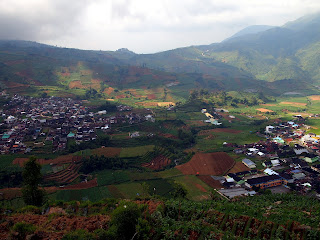 Built in the middle of Dieng Plateau, Arjuna temple is one of the Asia's most mysterious temples because there are not many reliefs and inscriptions about the temple. 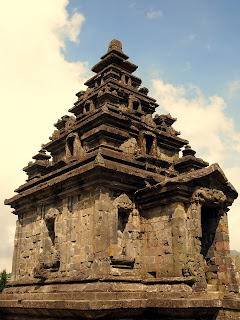 Next stop is Sikidang Crater. We were greeted by a strong odour as soon as we arrived at Sikidang Crater. The smell of sulphur can be a nuisance at first but I guess we kind of get used to it by the time we leave the place. The place is still popular for brimstone mining. Despite the strong odour, the steam contains sulfur that is believed to smooth the skin and eliminate acne. Hmmm... 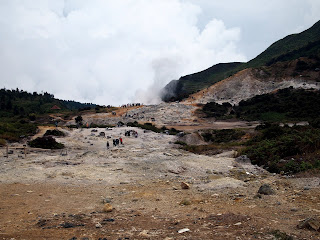 A short distance away is Telaga Warna (the Colorful Lake). It's a bright green volcanic lake that reminds CY of Lake Tekapo in NZ. 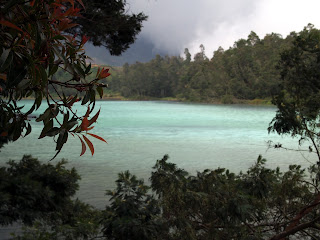 I insisted to try Mie Ongklok, the famous must eat dish in Dieng. I loved it. Thought it might not be so clean but I think that's what makes it special, eating by the roadside with wooden benches. 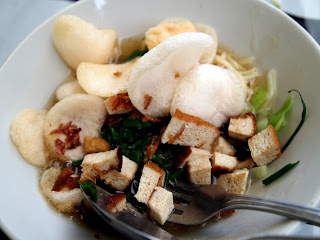 Our journey back to town was hell-ish was half way through, we had to U turn as there was an accident ahead. It took us double the time to get back.
After a long day, we all went to bed exhausted but excited thinking of the next day's itinerary.

yours truly, Unknown at 5:42 PM No comments:

yours truly, Unknown at 7:30 PM No comments: