Results are out. I scored a 37.08 mins. Not bad eh? But not great either. At least I don't have muscle pain the next day.
This is my 2nd Towerthon and 3rd time scaling up KL Tower. The second time was the most memorable. It was unexpected as it was a challenge in one of the treasure hunt I joined. We were quite shocked when we're asked to climb the 2058 steps of the tower to get our clues.
Anyway, one thing I realized about Malaysia - we are so poor in crowd control. We waited soooooo looooooonggggg to come down after the race, even longer than actually going up the stairs. That aside, we were being pushed into the lifts. No queues, no authority to control the crowd, no civilization. Imagine hot, sweating bodies, pushing at each other, waiting for the supposedly 4 lifts (which 1 malfunctioned) for easily half an hour.
It was bad. We should have just taken the staircase (which was only open up after they realized that the crowd is out of control).
Sigh, so another Towerthon for me next year? After the bad experience, maybe not. 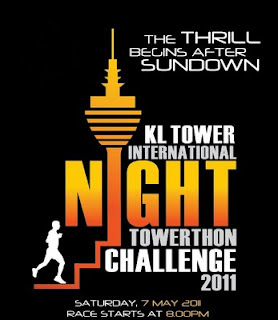 Email ThisBlogThis!Share to TwitterShare to FacebookShare to Pinterest
Labels: Marathon